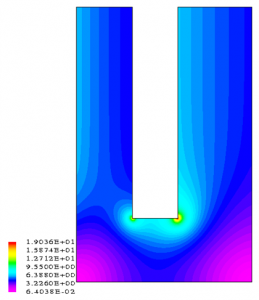 Certain types of fluids do not respond in a linear way to external forces – they are called non-Newtonian fluids. A simple model of a non-Newtonian fluid which is widely used in industrial applications (e.g. food processing) is the so-called power-law model. In very slow flows, the governing equation turns out to be the p-Laplace equation (a generalisation of Laplace’s equation).

In this project, numerical solutions of the p-Laplace equation will be found for the flow in simple geometries and a geometry that includes a singularity arising from a sharp corner. The project will involve analytical work and a substantial amount of programming.

The contour plot below shows the variation, calculated numerically, of a quantity called the shear rate in a geometry that has two singular points – one at each of the sharp corners at the lower end of the white region. If you look closely you can see two red areas where the shear rate is ~20 (the units are 1/sec) whereas the shear rate is smaller everywhere else. A theoretical analysis indicates that the shear rates should be infinite at these locations. The singular behaviour of the solution at these points affects the convergence of numerical solutions and the project would look at ways to overcome this problem.